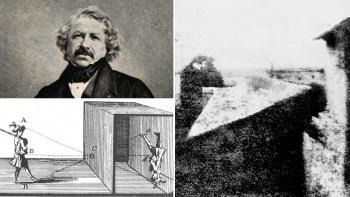 The following is a general description of the art of the Daguerreotype, as practised by its distinguished inventor: A plate of silvered copper, after having been well cleaned, and freed from any greasy substance, by polishing it with dilute nitric acid, line tripoli, or colcothar of vitriol, is placed in a box containing iodine, till its surface is covered with a golden yellow film of that evaporable substance.

The plate being carefully kept from light, is placed in the camera obscura, so as to receive upon its surface a distinct image of the landscape, or of the single figure, or group of figures, to be painted. After remaining a number of minutes, depending on the intensity of the light, the plate is taken out of the camera, and placed in what is called a mercury box. There it is exposed to the vapour of mercury, raised by a spirit lamp; and after a certain time, the operator, looking through a little window in front of the box, observes the landscape, or figures, gradually developing themselves on the surface of the plate, by the adhesion of the white mercurial vapour to those parts of the picture which had been acted upon by the light. When the development appears complete, the plate is placed in a vessel containing either a saturated solution of common salt, or a weak solution of the hyposulphite of pure soda.

By the action of either of these fluids, the coat of iodine is dissolved, and the picture is permanently fixed. It is then simply washed in distilled water, dried, and placed in a square of strong pasteboard, covered with glass. If we now carefully examine the picture thus produced, we shall find that its shadows are nothing more than the original polished surface of the silver, reflecting a dark ground, and that the lights are the parts of the silvered surface, which have been more or less whitened by the vapour of mercury.

If the plate is made to reflect a luminous surface, such as a white dress, or the sky, the shadows will appear luminous and white, and the lights dark, so as to give what may be called a negative picture. In this remarkable representation of nature, there is depicted, with the minutest accuracy, all her finest forms; but her gay colours are wanting; and the blue sky, and the green turf are exhibited in the same monotony of light and shadow, as when we view a highly coloured landscape, in water colours, or in oil, by the light of a monochromatic lamp.