Notice of the Letters of Robert Morris

Ojibway Indians Swimming in London
Preface: This article is from April 1844. There are a few things to note.

Zebulon Pike
Zebulon Montgomery Pike was an American explorer and military soldier.  He was born in 1779 and died in 1813 at the age of 34 during the Battle of York in the War of 1812.

Notice of the Letters of Robert Morris 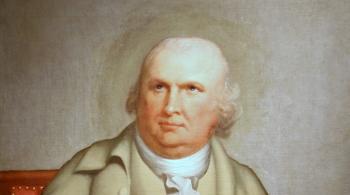 The volume containing Mr. Morris's public letters is, we believe, a gratuitous addition to the work made by Mr. Sparks, none of the correspondence of that great man remaining in the archives of the government, but having been obtained from private sources. It is full of interest, and deserves more minute illustration than we can now give to it. In Mr. Morris we recognize the most distinguished of the great patriots that Pennsylvania produced, the fellow of Dickinson, of Reed and Thomson, the man of whom the high praise has been pronounced that the cause of the Revolution owed more to him than to any other, with a single exception.

The spectacle which our government now presents of an extensive confederated republic, scarcely emerging from an in-fancy that has survived two wars, and yet left by the extinction of its debt to the independent employment of its own vast resources, is the appropriate theme of exultation, the object of reasonable self complacency; but how poor is the praise of those who have sustained the financial reputation which has produced this state of things, in comparison with the just eulogy of him, who, in the darkest and gloomiest period of our history, called that credit into being.

The struggle which resulted in the establishment of Robert Morris's fame on a basis that will endure as long as the re-public lasts, was the struggle between the power of a mind of unrivalled capacity, and the force of unpropitious circumstances, under which an intellectual and moral constitution of lean vigour mast have sunk. Moral integrity and a determined reliance on the judgment that posterity would pronounce, perfect indifference to suspicions he knew to be groundless, and scorn of the imputations his conscience repudiated, were characteristic elements which never failed him, and that enabled him to perform triumphantly the great work intrusted to his care.

The letters contained in the eleventh and twelfth volume of Mr. Sparks's work, are strongly illustrative of Mr. Morris's character and services, and would in themselves form the appropriate subject of elaborate review. It certainly is not our intention to disparage them by an incidental notice. We will, however, content ourselves now, with refer-ring to the dates of one or two of Mr. Morris's official letters, which, on the perusal, struck us as most interesting and important, and which alone will justify higher praise than we have bestowed on his intellectual merits. We may specify the letters of the 5th November 1781, to Congress, on the state quotas; those of the 18th December 1781, and 16th May 1782, to the Governors of the States on the same subject; and the two letters to Congress of 17th January, and 29th July, 1782, on the currency and the funding system.