Alexander's Electric Telegraph
A model to illustrate the nature and powers of this machine, was exhibited on Wednesday evening at the Society of Arts in Edinburgh. 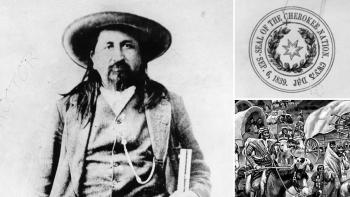 In this city, on the 6th instant, of erysipelas, in the 45th year of his age, EZEKIEL STARR, of the Cherokee Nation. The deceased was a man of extraordinary firmness, moral and physical courage, resignation, and patient endurance, displayed through the many trials which, in the course of an eventful life, he had to encounter. He always enjoyed a deep place to the affections of his family and numerous relatives, anti lie merited and shared the full confidence of his country men.

In 1831, the deceased, being among those who clearly foresaw that the Eastern Cherokees could not be relieved of the thraldom which surrounded them in the States, removed with his family and joined the Western Cherokees in their new homes.

Amidst all the trying ordeals through which the unhappy Cherokees have had to pass, the cool judgment of Ezekiel Starr was ever found useful and valuable. In the winter of 1843-44 he came to Washington as one of the delegates to plead the cause of the Treaty party before the Government ot the United states.

In the winter of 1844-45 he again came as a representative of the much injured party, under the encouragiment of the Government. He returned to has home last summer, and accompanied an exploring party of his countrymen to Northwest Texas. Returning front a long and fatiguing journey in January last, he found his large family circle driven from their homes in the Nation to the State of Arkansas and his valuable brother, James Starr, a signor of the Treaty of 1835 and an infant son, ruthlessly murdered, and their murderers stalking abroad unpunished. Yet, amidst all these provocations, Ezekiel Starr was never heard to make a spiteful or revengeful remark. By the unanimouss appointment of his partisans, anti at the invitation of the President, Mr. Starr, although afflicted, repaired to Washington as one of the Delegation to adjust with the United States the many difficulties of his comrades. Arriving here four weeks since, he was immediately attacked with the worst form of erysipelas, which the most skilful medical aid could not resist. Nothing but the most powerful constitution could have endured so long. Mr. Starr bore his affliction with Christian fortitude, and expired surrounded by condoling friends, who feel that their load is irreparable.

The friends of Ezekiel Starr, deceased, are invited to attend his funeral, without further notice, from Mrs. Hamilton, at 4 o'clock this day.